A wolf, a fox and a crow 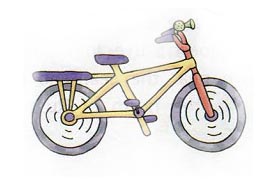 A wolf, a fox and a crow

Once upon a time in a small wood there lived Walter, the little wolf, and Fiona, the fox. They were good friends and often played different games together.
Once a crow came to live in the wood. Her name was Cathy. Cathy didn’t have friends in the forest. That’s why she was often sad. Cathy wanted to make friends with Walter and Fiona.
One day she came to them and said, “Hello! My name is Cathy. I don’t have friends in your wood. Can I play with you?” Fiona and Walter asked, “Do you like sports?” “Of course, I do,” answered the crow, because she wanted to play with Walter and Fiona very much. “Then let’s ride the bikes!” said Walter. Fiona and Walter happily rode their bikes, but the crow couldn’t ride a bike with them. She didn’t know how to ride a bike. “OK,” said Fiona, “Let’s roller-skate!” Fiona and Walter roller-skated and laughed, but Cathy couldn’t roller-skate with them, she didn’t know how to roller-skate. After that Walter and Fiona played tennis, but the crow couldn’t play with them because she didn’t know how to play tennis. Finally, Fiona said, “You don’t like sports! You can’t ride a bike, you can’t roller-skate, you can’t play tennis!” Walter agreed, “You can’t play with us!”
Cathy was very upset. She was very angry with Walter and Fiona and wanted to play a trick on them. She found them in the field. Walter and Fiona were playing with a ball. They were throwing the ball into the basket, which stood in the middle of the field. Cathy wanted to stop their game. She quickly took the basket into her beak and flew into the air. Fiona looked at Cathy and cried «Oh, Cathy, it’s a very good idea! You’re so clever!” Walter agreed, «It’s great, Cathy! We’re sorry we didn’t want to play with you. Let’s play together. You’ll fly with the basket and we’ll throw the ball in it! It’ll be fun!” Cathy was surprised. She could play with Walter and Fiona. After that day Fiona and Walter always played with Cathy who couldn’t ride a bike or play tennis, but always taught them new games.