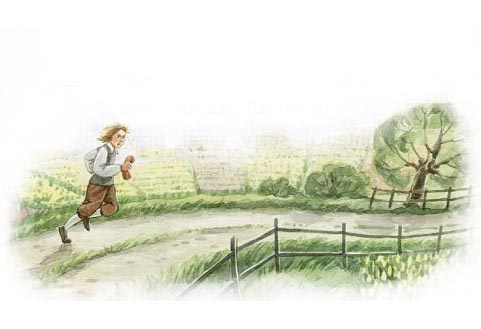 Once upon a time there lived a boy in a small town in Massachusetts, in America. His name was John Chapman.

He grew up on the farm. His father had a lot of work and he helped his father a lot. He liked working in the field and feeding the animals, but his favorite place on the farm was the apple orchard. John took care of the trees and picked the apples from the trees in autumn.

John wanted to go and live in the West, but his father didn’t like this idea and told him that there were no apple trees in the West. Johnny said, «Then I will bring apples to the people there. I will plant all kinds of apples -red, yellow and green.”

One day Johnny started his long journey to the West.

He took books and a big bag of apple seeds on his back. He planted seeds in all places where he came: in small villages and large villages, in small towns and large towns. All people loved him, because he was kind and friendly.

He told stories to children, fed animals and helped everyone.

Everywhere where Johnny went apple trees started to grow. People remembered that Johnny brought apple trees to them and gave him a name Johnny Appleseed. There are many legends about Johnny and his apple trees in America.