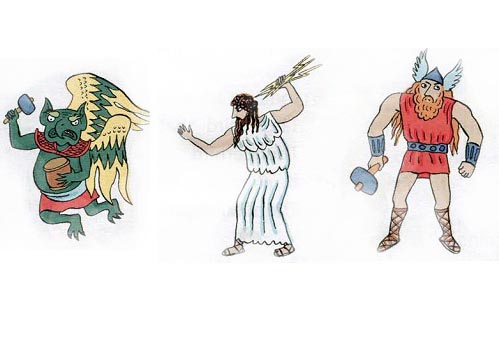 Long ago people didn’t know where lightning and thunder came from. People in different countries told different stories about them.

North American ( американский) Indians have myths about the Thunderbird. It is a large bird that can make storms. You cannot see the Thunderbird because there are always thick clouds around it. When it flies, its wings make the sound of thunder. The Thunderbird can shoot lightning from its eyes.
The Indians often paint the Thunderbird with horns, teeth in its beak and the second head on its body. The thunderbird carries two snakes. The snakes can also make lightning bolts.
Lei Gong is the Chinese (китайский) god of thunder. He looks like a man, with blue or green skin, a bird’s beak, claws, and bat or bird wings on his back. He carries drums and beats them with a hammer to make thunder.

Tian Mu is the goddess of lightning. She uses mirrors to make lightning bolts. She is the wife of Lei Gong.
Long ago in Germany and Scandinavia, Thor was the god of thunder. He was big and strong with a red beard and hair. People thought that during a thunderstorm, Thor rode across the sky in his chariot pulled by two goats. Lightning flashed when he threw his hammer. The name of the day of the week Thursday means “Thor’s day” .
The king of gods in Ancient Greece was Zeus. He was the god of the sky. He controlled thunder, lightning and rain. He sent thunderstorms against his enemies. People often painted Zeus as a strong man with a lightning bolt in his hand.

The Romans had a similar god. They called him Jupiter. The planet Jupiter is named after him.