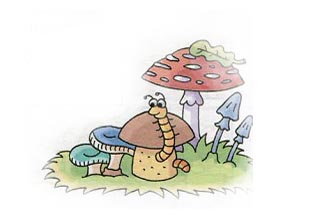 My name is Helen. I live in Great Britain in a city called Manchester. I’ve got a sister. Her name is Jane. Jane and I are twins. Our birthday was on the fourteenth of April, so now we are twelve. We’ve got a pen pal. Her name is Sveta. She doesn’t live in Great Britain. She lives in Russia, in a town near the sea. The name of the town is Arkhangelsk. It’s in the north of Russia.
Last summer Sveta invited me and Jane to visit her. We were very pleased to travel to another country. We arrived at Arkhangelsk on Saturday, the twenty-first of July. The next day, Sunday, we went to the countryside with Sveta, her mother and father. The weather was warm. The sun was shining in the sky. We came to a big lake. There was a field and a forest near the lake.
Lots of different flowers grew in the field and I saw a very beautiful butterfly among them. We swam in the lake, and then we had lunch. After lunch Sveta’s father went fishing. He wanted to cook fish soup. We didn’t want to go fishing. Sveta said, “Let’s go to the forest to pick mushrooms.
In Great Britain people don’t usually pick mushrooms in the forest. We buy mushrooms in a shop. My sister and I did not know how to pick mushrooms. We looked and looked, and then I saw a big red and white mushroom.
It was beautiful. Jane saw another mushroom. It was different. It was smaller than my mushroom, and it was brown. I said to Jane, “My mushroom’s better than your mushroom, because it’s bigger.” Then I saw a big yellow worm in Jane’s mushroom. I was scared. “Oh, a worm! Yuck!” I shouted.
We showed our mushrooms to Sveta. Sveta said to my sister, “Your mushroom’s very good. We can cook it.” Jane put the mushroom in her bag. Then Sveta said to me, “I’m sorry Helen, but your mushroom’s poisonous. We mustn’t eat it.” I put the mushroom on the grass. Sveta showed us some good mushrooms so that we knew what to look for. There were a lot of mushrooms in the forest and in the evening our bags were full of mushrooms. Sveta’s father didn’t catch any fish, so her mother cooked some delicious mushroom soup. It was lucky Sveta, Jane and I went mushroom picking! I had a wonderful time in the country.