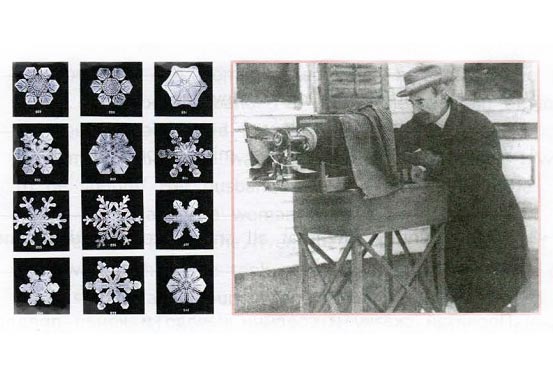 Wilson Bentley was born in America in February 1865.
His parents were farmers. He liked snowflakes when he was a boy.
When he was 15 years old his mother gave him a microscope. He looked at the snowflakes through the microscope. He wanted to draw them. But it was very difficult to draw a snowflake because it melted very quickly. So he began to take photographs.
It was difficult to get a good photo of a snowflake. He tried and tried and tried. Finally, after many experiments, Wilson Bentley photographed his first snowflake on 15 January, 1885!
During his life he made more than 5,000 photos of snowflakes. He also saw that all snowflakes are different. Bentley called snowflakes “ice flowers”.
You can see his collection of photos in the Buffalo Museum of Science in the USA.